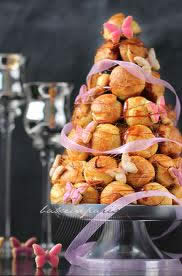 Wikipedia has informed me that ‘A pièce montée (from French, literally “assembled piece” or “mounted piece,” plural pièces montées) is a kind of decorative cake centerpiece in an architectural or sculptural form used for formal banquets.  They are associated with classical French chefs such as Carême. Carême had studied architecture and is credited with saying, referring to pièces montées, that architecture was the most noble of the arts and that pastry was the highest form of architecture.

The term pièce montée is an assemblage of cream puffs stuck together with caramel or spun sugar into a tall, usually conical shape.  It is traditionally served at parties celebrating weddings and baptisms in France. Figurines representing the newlyweds are traditionally placed on top of the pièce montée at weddings.

Colorado Beetles in my Potatoes