Ruins in France – what to do with them 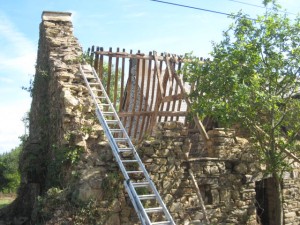 We are the proud owners of ruins in France! A couple of weeks ago we finally purchased a small ruin, about 3-metre square, which has been slowly falling down over the last 50 years!

This small ruin is literally attached to our house but because of France’s bizarre inheritance laws it has always belonged to someone else and whom up until now has not wanted to sell it.

Our first priority was to make it safe… up until now I have been very concerned that a rock could fall at any time from the decaying ruin. 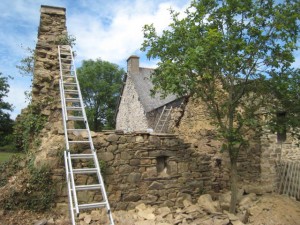 Last week Mark and I cleared the brambles, bottles and even an old fridge from the undergrowth. Today, Mark started the serious work… dismantling the roof. Corrugated iron sheets were discarded, roof timbers were sawn up and removed and loose rocks were thrown to one side.

Now what to do with this little roofless space? Should we dismantle it completely? Re-roof it? Take down the back wall and re-roof a larger area?

I think it would make a rather nice home for a 2CV… Mark may have other ideas!

Strawberry fields for ever

The swarm in the hive