Paying with a blank cheque 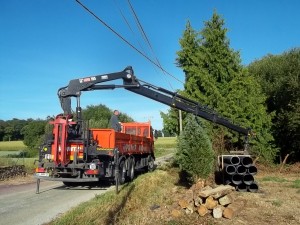 After weeks of deliberation…. action!!

When we bought the small ruin next to our house we also ‘had’ to buy the small field adjacent to our garden.
This field, together with the bottom third of our garden, is permanently wet as it is the lowest point in Reminiac and all water drains into our back garden together with the contents of our neighbours dodgy fosse!!

This weekend we will tackle the drainage… let the ground work commence….

We also need to ’smarten’ up the area around the ruin…. so, 23 tonnes of gravel from the local quarry have been delivered: two huge lorry loads!! 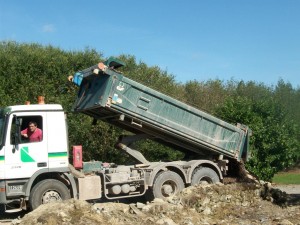 After the driver delivered the first load, he knocked on the door.

‘I’m not quite sure how much the two loads will be, but if you give me a signed blank cheque I can fill it in after we have weighed the second load.’
‘OK’. I replied, and gave him the signed cheque.

He returned an hour later with the second load and a copy of my cheque which had been duly completed with the same amount as the invoice.

Whilst I was living in London I would never have handed someone whom I didn’t know a blank cheque.
Am I becoming soft and gullible, or am I living in an environment where there is more trust?

Tomorrow the JCB arrives, for lots of ground moving fun!

Land and crops overrun by rabbits