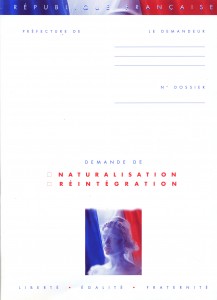 Each year I try to do something to integrate us further into French culture. We have joined the local library, have French television (confession…I don’t watch it though!!) and we are eligible to vote in the local elections.

We have lived in France for ten years now, we work in France, we pay our taxes here and the children go to school in France. Now is the time.

I have called the Prefecture (government offices) in Vannes several times as this department is only open Tuesday afternoons between 2 – 4pm !!

Eventually, I spoke to someone and have been asked to come for an interview on Tuesday at 10.30am.

I have no idea what the process entails. Will there be an exam testing my ‘cultural knowledge’ and language skills?

I have no idea. Tuesday, all will be revealed!!

Snooping around the chateau