Whilst waiting outside the church it became apparent that there were three christenings and the thing that struck me was how casually everyone was dressed. Jeans mainly. The father of one of the children being christened was wearing tired blue jeans ans white trainers. 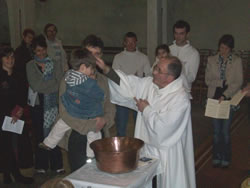 See, Mark said, I need not have worn this shirt.

11.00am, the priest invited us into the church. Churches are very theatrical places, high ceilings, stained glass windows, sculptures, candles. The ceremony took about an hour.

At 12.00 we were back chez François and Fabienne enjoying champagne outside in the Spring sunshine. Aperitifs are a very important part of any French meal. We had three food courses with the aperitifs and there was not a peanut in sight !!

At 3 o’clock we all sat round a huge table and started the five course lunch. Conversations, laughter, good food, children drifting in and out when more food appeared on the table. A real French fête. The English just cannot reproduce this. Great Aunts genuinely conversing about shirt lengths to an 18 year old, another guest searches for a stool in the wood shed, the same knives, forks, plates and glasses are kept for the entire meal, great hunks of deliciously fresh bread are used to clean the plates after each course. 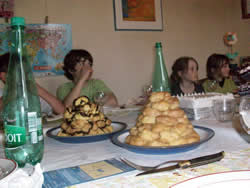 Why are we so stuffy ?.. and I include myself in this.. I would panic if I didn’t have enough coffee cups. Not Fabienne the coffee pot was handed to one guest, he poured some into his wine glass and the coffee pot went round the table until everyone had a wine glass full of coffee. This was not deemed as unusual but as completely normal. As Fabienne and François were so relaxed, so were their guests. True hosts.

PS. (added later after Anne’s comments) The pièce de montée didn’t quite turn out as Wikipedia illustrated it but both the chocolate and caramel pièces de montée were devoured and some people even came back for more so maybe I just got away with it.

Facts about bees – How to create an Artifical Swarm