Huge pumpkins, chestnuts and a bucketful of Quince. 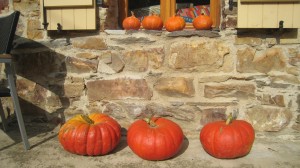 We have had some really very warm weather over the last couple of weeks. Pretty chilly mornings, down to 7 degrees but by late morning temperatures up to 20 degrees. Perfect pumpkin ripening and walnut drying weather.

Yesterday I decided to tackle a pumpkin. Wow, that orange skin is hard. After I had peeled, deseeded and chopped up the beautiful orange vegetable I was left with 10kg of prepared pumpkin… I made a lot of soup!

We have a quince tree. A couple of weeks ago, I picked two bucketfuls of these knobbly fruits. I love the rose like smell of these ugly fruits but I’m not sure if I like the taste. I’ve tried, but no, I don’t think I do. The trouble with quince is their longevity, they just don’t go bad. If they had all gone rotten, then “tant pis”, I could tip the buckets up into the compost and not feel too guilty. But the fruits are still perfect… 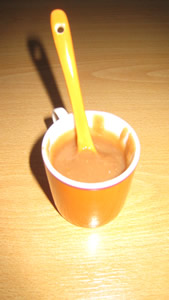 Crème de Châtaigne. Have you made yours yet?

I didn’t find too many chanterelle mushrooms… but wow, the chestnuts are big this year.

I stopped at the village shop on my way back from the forest. Lucienne was just leaving with her baguette and saw the basket of chestnuts in my boot. French women always look in car boots, in the same way as you check out your neighbour’s shopping trolley if you happen too see them in Sainsbury’s. 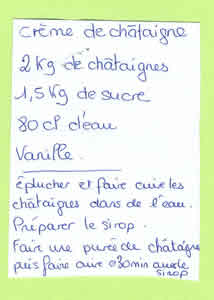 ‘Chestnuts’ Lucienne remarked. ‘I made my Crème de Châtaigne this morning.’

I must have looked confused.

About an hour later, there was a knock on the door. Lucienne.

She handed me the recipe for Crème de Châtaigne and a tiny pot of the chestnut jam for me to try. Delicious.

Strikes and protests in France – your views please