Noisette – a goat in the Loire

A friend of ours has just moved house. She is downsizing and moving from a country setting to a small village. Her dilemna? What to do with Noisette the goat. Her solution? Call Jean and Max. Simple really. Her logic? Well, you don’t have a goat so you probably need one. Hmmm.

Actually, cutting the grass and the brambles on the banks of the moat is a real pain and involves the most appallingly dangerous acrobatics whilst juggling with a machine. Being a mountain goat, Noisette could well eliminate the annual risk to life and limb. We agreed to take her. 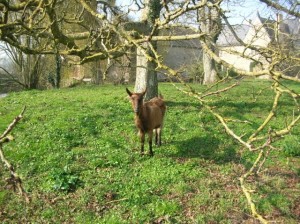 We collected Noisette on the day of Le Crunch. Rugby fans will know that this was the big England/France match for the Six Nations. When we arrived Nicole’s son (approx 30) was firstly very helpful with getting the goat into the van and secondly very excited about the match. The discussion was short as we were worried about what Noisette would do to the inside of the van.

As we left, the son told us that he had explained to Noisette, who is a French goat, that we would probably speak to her in English and she wasn’t to worry. I asked him if he had also explained that animals at Grand Gennetay are expected to work for their living? “Oui, oui, pas de probleme.” Had he also explained to her what happened if she broke her side of the bargain (I was enjoying this!). He looked a little perplexed. Nicole muttered “Mon dieu!” and explained more fully where Noisette was going to be living and where we find our food.

I was, of course, joking. I am not squeamish about eating our animals as I think this blog shows, but I couldn’t possibly do so when we had been given what was effectively a family pet.
The good news, apart from the outcome of the match, is that Noisette is cutting the grass very effectively. We will move her down to the banks of the moat shortly.

New start in the garden

Competition. A good or bad thing?