A trip to Ikea in Rennes

A couple of years ago Ikea opened in Rennes and it is proving to be a huge success. I’m sure that its success will however have an impact on the many second hand furniture shops and ‘depot ventes’ that can be found throughout rural France.

Yesterday, we joined the masses and took a trip to the Ikea store in Rennes and spent two hours following the designated paths.

Mark has just left to take Iona and Joe to Judo.

“What are you doing this morning”, Mark asked as he left.

I glanced at a weeks worth of ironing.

“If you can put that Ikea chest of drawers together by the time I get back, I’ll do your ironing.” He said grinning as the door slammed.

Mark doesn’t even know where the iron is kept so there is no way he’ll tackle the ironing….. but I can’t resist a challenge… how hard can it be. Surely it’s just like a big lego kit.

I empty the box. Put everything in lines and find screwdrivers and a hammer.

Half an hour later…. 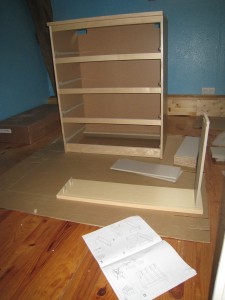 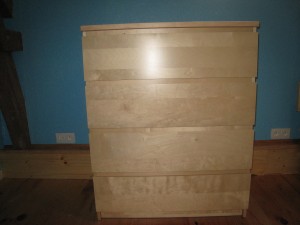 I just hope that it doesn’t fall apart……